One of My Very Favorite Bands 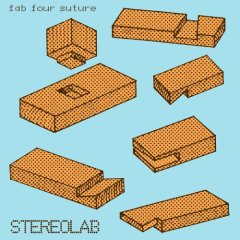 Stereolab has just come out with a new album that I really enjoy: "Fab Four Suture." This new one and the one before, "Margerine Eclipse" (yes, "margerine" is misspelled for some reason), are densely layered, almost baroque electronic-flavored wonderlands of songs that release endorphins whenever I listen to them. There are plenty of drumbeats and some guitars, and many of the lyrics are sung in French. Many of the songs have a retro 60s pop feel.

From Amazon.com: "You want retro? Get a load of their equipment, from the vintage Farfisa and Vox organs to the ever-lovable Moog synthesizers. You want futurist? It's the sound of not-so-well-oiled machinery, churning and sputtering into space age bachelor pad heaven and postindustrial hell. You want pure pop? Dig how they mine mod sounds of the '60s, from Burt Bacharach to Françoise Hardy, and pull melodies straight out of a bubblegum wrapper. You want avant garde? Check the blatant liftings from '70s krautrockers Neu! and Can, plus their appropriations of Philip Glass's disjointed wordplay and Ornette Coleman's jagged alto sax. You want meaning? These are songs loaded with optimism, progressivism, humanism, and dashes of Marxism. You want nonsense? There's plenty of la-la-la's to lead us into oblivion, and head vocalist Laetitia Sadier sings half the time in French. You want a groove band? Tracks like 'Metronomic Underground' and 'Les Yper-Sound' cast a funk trance heavier than voodoo and at least as danceable as any neo-hippie tripe. You want a band that rocks? Try 'The Noise of Carpet' for its rug-burning guitar and acceleration drum whacks. Yesterday, tomorrow, now: Stereolab's the one."

Anyway, very highly recommended! Go read more reviews and listen to some samples at Amazon. They have many, many albums, but these two most recent ones I've mentioned are most accessible and fun to listen to. Many of the earlier albums have a more challenging, experimental sound... 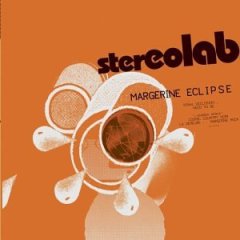 Hey, thanks for the recommendation. The only album by Stereolab that I have is Emperor Tomato Ketchup, but I really love it, so I will check this new album out.

Emperor Tomato Ketchup just arrived in the mail from Amazon, and I'm liking it too. I think that one came out in the mid-1990s and was their breakthrough, if I understand right. The only thing that bugs me a little about the new "Fab Four Suture" is that the first and last tracks are both a bit repetitive; someone overhearing them on my computer asked me if my iTunes was skipping...