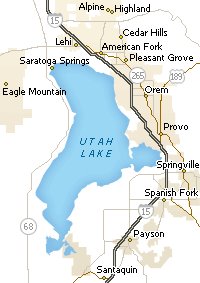 Here's something I wrote on an e-mail discussion list in reply to someone worried about moving to Utah County as a Democrat, cultural liberal, and beard-wearer:

I live in what may be the cultural heart of Mormonism: the residential area immediately north of the Missionary Training Center and the Provo temple, a place full of BYU personnel and those who love and cleave to cultural Mormonism with all their hearts. I go to church most weeks, and I wear a beard, colored shirts, sometimes black Levis, sometimes nice sandals without socks (I would never stoop to flip flops). But I don't look to my ward/neighborhood for social life; I tend to get all my social life from family and workmates, many of whom are inactive or non-Mormon. I do have a calling as an assistant bean-counter clerk, and no one has tried to tell me to Mormonize my dress code or grooming.

Frankly, I don't consider myself much interested in the average conservative, homogenous person in my ward/neighborhood, and I assume they're not much interested in me either. I don't have any close friends in my ward/neighborhood, just people I'm somewhat acquainted with through home teaching and church contact. I actually get some entertainment in watching these folks go through their carefully choreographed Mormon lives; I'm serious, for most people in my ward/neighborhood, their idea of sinning is listening to the Mormon Tab Choir a little too loud. Many of the people are so righteous and Mormon that they seem almost like androids to me. Watching them, I feel more like a bemused anthropologist than a fellow Saint, and I do sometimes allow myself to secretly gag. But I'm pretty low key, and people don't get in my face for my pecadillos; they probably don't even notice me. And maybe I'm not as different from them as I sometimes like to think.

I never thought I'd end up in Utah County and still actively dislike many aspects of it, but somehow I don't despise it overall. The older I get, the more I'm satisfied when certain basic needs are met, and Utah County meets those, for the most part, although aesthetically the only thing pleasing about it is the mountains, which are even better than in Salt Lake County, in my opinion. I'm culturally liberal, but I'm not politically aware, so I just punch Democrat if and when my wife gets me to the polls, just to be different. Anyway, my wife's roots are deep here, and my kids from my first marriage are nearby, and I don't have the economic/career wherewithal to make a move, so I'm stuck but OK with that, for now.
Share |
Posted by Christopher Bigelow at 3/07/2006