Mini-Review of John Updike's "Marry Me: A Romance" 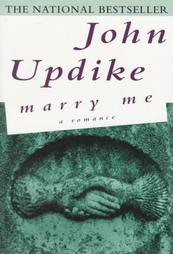 I've said my favorite author is John Updike, which is a good choice because he's so prolific that I'm still able to discover new stuff written by him more than 15 years after I first started reading him in college.

Anyway, I just finished reading "Marry Me: A Romance," which I would call a B-grade novel for Updike. It's about two couples who get tangled up in adultery with each other. One of the adulterous couples never lets their spouses know about their adultery, but the other adulterous couple very nearly decides to divorce the spouses and start anew together, and that waffling choice is probably the main tension that drives the plot.

This novel features plenty of Updike's fantastic descriptions and characterizations, but it didn't blow me away as much as some of his others. It seems very realistic in exploring the characters' emotions about marriage and infidelity, yet there's also something a little flat about aspects of the emotional response. Updike comes at it from the point-of-view of several different characters, but the POV actually gets a bit muddled in some spots. I would say the middle section from the perspective of Ruth is strongest, and the opening and closing sections are a little less strong for Updike, although still way better than what most writers can pull off.

Updike both inspires me and discourages me. My own writing tends to get a little better under his influence, but I recognize that I could never hope to match his level of skill and output. Not that I would necessarily WANT to ape everything about him; sometimes he tends to overwrite some things. Anyway, I hope Updike wins the Nobel in literature before he dies . . .
Share |
Posted by Christopher Bigelow at 4/27/2006