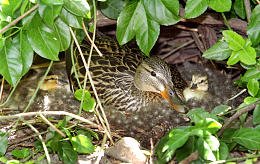 My wife recently alerted the media about a story in her kindergarten, and the Deseret News came through with the following. (KSL-TV also sent a news crew, but I don't know if they've aired anything yet):

PROVO — Four fuzzy ducklings popped their heads out from under their mother Thursday afternoon, new to the world and seemingly oblivious to their surroundings. They hatched in a schoolyard, and their protectors were about 95 kindergarten students at Rock Canyon Elementary.

"We think they started hatching on Monday," said Rock Canyon kindergarten teacher Ashley Patterson. "(The mother) started moving around a lot on Monday."

The mama duck — given the name Mrs. Daisy Duck by Patterson — this spring chose the school as the place she wanted to lay her eggs.

Click here for the rest of the story (including some quotes from my wife):

A ducky surprise at Provo school 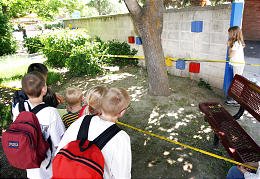