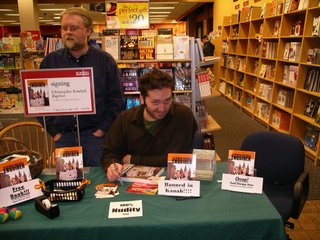 We have been having a pretty fun time with the Mormon Tabernacle Enquirer. As hoped for, some of the Salt Lake media have come through with some coverage, and I hope more coverage is forthcoming. Our launch party at Sam Weller’s in downtown Salt Lake the other night was poorly attended but still loads of fun (bottom photo), and our book signings at Borders bookstores in Provo (top photo) and Murray were more fun than I expected, because we accosted people in a faux-missionary way and sold 30-40 copies between the two events.

It’s hard to know, but overall I’d say that the book is not appealing to mainstream Mormons as much as I’d hoped. At considerable expense, I mailed out sample copies to about 150 LDS bookstores, but only a couple have agreed to carry it so far and several have e-mailed back that it is too edgy for them. Oh, well, maybe more will carry it later on, especially if I can bring myself to make some sales phone calls. My experience with the Irreantum literary journal was that most wouldn’t order unless I called and put them on the spot.

I suppose I could have tried to calm down the material more and leave out some of the wilder articles, but that goes against my personality. We are what we are! If I’m ever to develop an audience, they’re going to have to do more meeting me on my own terms than I’m going to kowtow to their terms. I suppose that means I may never develop a significant audience . . . but honestly, I’m not sure I want one unless it can be mostly on my own terms. I had plenty of opportunity to address the conservative Mormon audience while I worked at the Ensign, and frankly it bored the hell out of me. I relate more with the liberal Sunstone crowd, but I have limited interest in academic or intellectual writing. I don’t even like the word literary. I’m just into good, compelling entertainment.

After not enjoying the experience of appearing live on Park City TV to shill the book (along with Paul Browning and Stephen Carter, who did most of the talking), I referred Stephen to appear on Fox 13's morning show this week. Part of it was wimpiness on my part, but another part recognizes that I’m only the fourth or fifth funniest guy on our staff and that I’ve already gotten more than my share of attention for my editorial leadership role, so why not let others share in the glory. I will go on the air if ever needed, but I’m relieved to have Stephen handle this one. 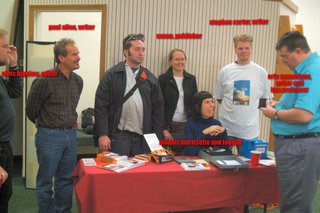 That's awesome that you got alannis to show up at least.

when we doin lunch?

I wrote a little post about your book today. Enjoy. :)

heads up: it looks like FMH may be running a version of my Kama Sutra post. I've included a link to the MTE in the post (linking to your zarahemla site).