Going Down on The Road 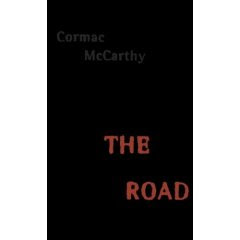 I recently finished a rather amazing novel that, if I'm not quite prepared to claim it changed my life, certainly made a deep impact on me. And apparently it's making a big impact on others too, as it just won the Pulitzer and also got chosen by Oprah for her book club. (Has any book managed both of those honors before?)

Cormac McCarthy's novel follows a man and his son as they wander down the road in a depopulated, post-apocalyptic world in which no plants and animals remain alive and ashes constantly taint the air, ground, and rain.

There are no chapter breaks, but the narrative comes in short chunks that make this book very readable. The style is extremely spare, so it reads really quick and smooth—in fact, it's so spare that the author even leaves the apostrophes off his contractions, for some reason, as if all the world's apostrophes have already been used up. In a handful of spots, he does go off into weird, puzzling little poetic/philosophical tangents (especially the very last paragraph of the book), but those are short, infrequent, and easily recovered from.

McCarthy doesn't go into much detail about what happened before the novel opens or where the father and son have been and what they've been doing for several years in this condition. I never figured out why they were located so far north in the first place--the plot of the novel revolves around them trying to outrun winter and get down to the coast. There are a few other people still alive, but most of them seem to be cannibals, so the father and son constantly hide and have a few harrowing encounters. They are constantly searching through abandoned houses looking for food and shelter, sometimes nearly starving. These details are all spare and yet amazingly graphic and vivid.

There are fantastic details about the post-apocalyptic world, such as freeways full of burned cars with the old, fried corpses still visible inside. Another great detail is some buildings that look slightly askew, as if heat melted their frameworks and then they rehardened into slightly skeewumpus positions.

At the heart, what was so moving about the book was the father's concern for his son and the sacrifices he makes for the boy in such a hard, hopeless situation. As the father of four sons, I found myself doing a lot of soul-searching about how I would handle a similar situation.

If done right, this novel could make an incredible movie. One main reason I read this book is because I'm writing my own post-civilization novel, but I never have time to work on it because I'm trying to get another crop of Zarahemla books ready.
Share |
Posted by Christopher Bigelow at 4/18/2007

And we thank you for it.