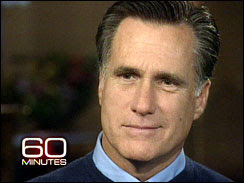 I really don't follow politics much—in fact, sometimes I think of myself as apolitical—but I can't help keeping a finger on the pulse of the Mitt Romney presidential campaign. Not only is he a Mormon like me, but I'm actually personally acquainted with him from my time in Boston (he once gave me a ride in his black BMW after interviewing me, and my ex-wife was his hairdresser).

At first I found it almost impossible to imagine Mitt getting elected, but as time passes I'm becoming more of a believer, although I still wouldn't bet money on it. Even if he manages to get the Republican nomination, I don't think there's any way this country will—or perhaps even should—elect another Republican president after eight years of Bush. If anyone but Romney gets the Republican nomination, I will probably vote Democrat—yes, even perhaps for Hillary.

Mitt's enjoyed a pretty good ride in the media. Boston Globe columnists can sometimes be very nasty about him, but the Globe recently ran an amazingly positive and in-depth series of articles on him, of which I've read every word. He's got such a solid background and character.

It bothers me when people say Mitt's a flip-flopper. I believe human beings should constantly be changing their minds on their views, as they gain new experiences and perspectives. Plus, I think it's healthy for a politician to bend his views somewhat to fit the people he's representing, rather than imposing his views on them.

I have to wonder, deep down does Mitt really think he can win, or are there other motives for running a campaign that he knows won't ultimately get him elected? After all, I think he may be doing more missionary work—or at least positive PR—for the LDS Church than any other single person who's ever lived.
Share |
Posted by Christopher Bigelow at 10/29/2007

I'd think twice about voting for Hillary if you want to sleep in the same bed with me (since I'm ultra-conservative, allbeit more liberal than most members of my family).

I linked to this article on the Mitt Report, it will be on around Noon EST on Tuesday. Great post.
http://www.mittreport.com
http://www.dryflypolitics.com

You need to read the new book:
"When Salt Lake City Calls"
by Rocky Hulse

Mitt or no Mitt, for the life of me I can't imagine how anyone could vote for a Republican candidate this next presidential election.