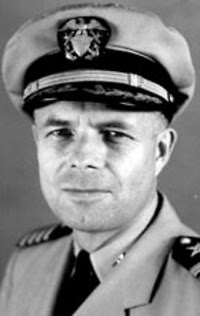 My grandfather, LaVell Bigelow, died last week at age 89, and I found his funeral extremely moving, especially the parts about his World War II heroism. However, as with so many other things these days, considering his life and accomplishments has added to my mid-life inferiority complex, contemplating how much more manly mojo he's displayed than I've ever even come close to imagining. Anyway, here's a nice write-up that the Salt Lake Tribune did (I took the liberty of correcting some grammatical and factual errors):

Combat pilot was a 3-time Navy Cross winner
He took part in epic WWII events, including the Coral Sea battle and the Japanese surrender
By Glen Warchol
The Salt Lake Tribune
06/23/2007

Lt. LaVell Bigelow nosed over his lumbering dive bomber into a near-vertical bomb run on a Japanese aircraft carrier 14,000 feet below just as he noticed an enemy Zero fighter was following him down.

Bigelow knew he would be a perfect target if he held his Dauntless dive bomber in the steady arc required to accurately place his 1,000-pound bomb through the Shoho's deck. His survival and his rear-seat gunner's survival depended on him, instead, to simply dump the bomb and concentrate on dodging the Zero's machine guns.

His granddaughter Angela Jacob, 23, remembers Bigelow recounting the 1942 Battle of the Coral Sea to her: "The Holy Ghost came into my mind: 'You dummy!' He said. 'You have to get a hit on that ship! Your country is depending on you. You have been promised you will not be harmed in this war. Hold a steady dive."

Bigelow, a longtime Utah County resident, who won three Navy Crosses in World War II, died June 18th. He was 89. The retired Captain would end his Pacific experience leading a squadron of fighters over the battleship USS Missouri as the Japanese surrendered on Sept. 2, 1945.

"That was kind of a fun thing," he told KUED researchers making a documentary on the Pacific war. "We had a nice parade formation of eighteen planes flying over the Missouri during the signing of that peace treaty."

Bigelow would earn his first Navy Cross, the highest medal awarded by the Navy short of the Congressional Medal of Honor, that May morning diving on the Shoho. The 24-year-old Provo native ignored the Zero on his tail and kept his bomb sight locked on the ship below. As he dropped to less than 1,000 feet above the carrier's deck, he released the bomb and pulled out of his dive.

The Zero screamed past, inexplicably not having fired a shot. "LaVell and his tail gunner didn't see any tracers going by," Jacob said.

As the Dauntless climbed for altitude, the tail gunner reported they had hit their target. After several more bomb and torpedo hits, the Shoho became the first major Japanese warship sunk in the war.

Bigelow married Avalon Christensen in Norfolk, Va., December 5, 1941. Two days later the Japanese attacked Pearl Harbor and he was ordered to the Pacific. "Before he left for the war, he and his wife knelt down and said a prayer that he would not be harmed," Jacob said.

Her grandfather went on to win Navy Crosses for an attack at Tulagi that sank a Japanese cruiser and for participating in the sinking of the Yamato, the world's largest battleship.

Jacob, who is writing a family history of her grandfather, has become fascinated by the exploits of World War II naval aviators and the terrible casualties they suffered flying from the heaving carrier decks. "How courageous. It's amazing that any of them survived," she said.

Bigelow retired from the Navy in 1968 after having served various roles all over the world, including as a test pilot in the 1950s.

"I grew up near him all my life," said Jacob. "As a child you just think he's your grandpa. But as I learned about World War II and his role in those great battles, I started to think - this is a special guy."

More details from the obit:

He was born on November 12, 1917, in Provo, UT to Percival and Margaret Bigelow. He graduated from BYU and subsequently earned his Masters and Doctorate Degrees. He served as a Naval Aviator until 1965, when he entered the world of business and education. He earned three Navy Crosses, the Navy's highest award, as a dive-bomber pilot in the Pacific in World War II.

LaVell married Avalon Christensen in Norfolk, VA two days prior to Pearl Harbor. Their marriage was later solemnized in the Manti Temple. They were blessed with seven sons. His children revere him for his hard work, integrity, respect for others and their property, his desire for learning, love of God, and activity in the LDS Church.

Interment will be in the Arlington National Cemetery, VA. I operate the website at www.homeofheroes.com where we list all recipients of the MOH/DSC/NC/AFC. While I have the citations posted for your grandfather's first two Navy Crosses, I do NOT have the citation for his third (for actions on July 28, 1945). I would be most appreciative if you could provide me the text of that citation, and if you have copies of the citations for all three, if you would be so kind as to copy and mail them to me so I have hard copies it my files, it would be greatly appreciated.

My thoughts and prayers with you and your family durin this time.

Holy crap, he is the spitting image of your youngest boy. Don't you think??

I think he looks like you, Chrissy. A definite Bigelow-y face.

Well, we had all been assuming that Zach mostly looks like my wife and her family, except for the obvious Bigelow head shape. But I agree that some of these LaVell photos do call Zach to mind. Maybe we should have named him LaVell?