My Take on the Joseph Smith Photo 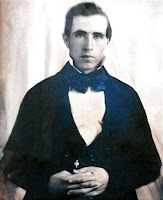 In case you hadn't heard, the image on the left has recently raised a ruckus as possibly being a photo of the Prophet Joseph Smith. There's plenty of controversy over it, and I've found myself quite interested in it—it's almost as fascinating as seeing a picture of the Savior himself. The idea of a photo like this really makes Joseph Smith seem like a human being to me. Anyway, following are some comments I made to the Provo Daily Herald:

Provo resident Christopher Bigelow, co-author of Mormonism for Dummies, said via e-mail that he finds the photo "much more interesting and human" than the "Disneyfied" Smith most often depicted in paintings and films and would be pleased if it's authentic: "This photo really speaks to my imagination."

On the other hand, Bigelow has his doubts. "If I had to place a bet," he said, "I would wager that it is not an actual photo of Joseph Smith, but I hope to be pleasantly surprised." [. . .]

Bigelow referred to an article printed in the LDS Church's New Era magazine in December 2005 titled, "What Did Joseph Smith Really Look Like?" (The article can be read online at lds.org.) "I'm not sure this photo resembles Joseph enough to remove all doubt," Bigelow said. "The man in the photo seems a bit more thin-chested, large-handed and darker-haired than descriptions of Joseph Smith, although the large, intense eyes could possibly fit Joseph's description."

This guy looks timid and beat-upable. Most accounts of JS describe a big imposing physique, and a lot of confidence. Surely a guy that runs a city and a huge religious movement would exude more self-assuredness.

I saw the photo almost a year ago and had doubt that it was him then and consequently forgot about it until the news resurfaced with it.
Maybe its just because of the Disneyfied paintings we are used to, kinda like what would most people think if a guy who looked like the typical Jesus from the paintings walked into their wards.

Someone had relayed to me that the photo was purportedly taken soon after Joseph Smith was released from jail. Given those circumstances, I could buy the lack of confidence.

Incidentally, I put the photo up on my blog, too, but then took it down after a blogger pummeled me with links basically saying the issue's already been covered, it's not him, so move on. I'm with you, though. I wouldn't lay a bet down that it was him, but I'd like to be proven wrong.