Trying Again to Get Sunstoned 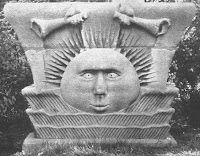 Seven years ago, I was one of three finalists for the position of Sunstone magazine editor. This past month, I was one of four finalists at Sunstone again, but I didn't get the job this time either.

I have to admit that I did feel some moments of really wanting the job, but I also felt an equal number of moments of not wanting it. For one thing, the commute to Salt Lake would have sucked, although perhaps I could have arranged some telecommuting. For another, working at a tiny, understaffed nonprofit would have been quite different from working at large corporations, which I've done continuously for the past 14 years. At Sunstone, I'm sure I would have had to give up most of my extra activities—but then again, maybe that could have been a good thing, as I sometimes feel I'm spread too thin in my life and not focusing on any one thing particularly well.

Sunstone actually advertised two positions this time around, and perhaps one weakness of my application is that I didn't know for sure which job I wanted. Magazine editor would be a natural fit for me in many ways, but on the other hand I might not have enjoyed being tied to a magazine and doing so much reading of submissions, etc. The other position was director of outreach and symposia, which could have been interesting and let me flex some different muscles from the usual writing and editing I'm constantly doing.

I love that Sunstone exists in Mormon culture. I always look forward to the magazine and read most of it, but I don't usually attend the annual symposium because I find the selection overwhelming and I don't like to sit and listen for long, as I tend to sleep or daydream in meetings and lectures. While I sympathize with nearly everything that Sunstone does and stands for, I wouldn't say that Sunstone is a perfect fit for my personality and interests. For one thing, I'm not as academic or intellectual or skeptical as most Sunstoners. Since I consciously accepted the LDS religion at age 19, I haven't had any big crisis of faith that has caused me to seriously doubt one or more of Mormonism's basic claims, but everyone I know who's been deeply involved in Sunstone has serious doubts and reservations about some aspect of Mormonism or has already completely left the church. While I'm culturally quite liberal, I tend to be doctrinally conservative, which I'm sure would have caused friction at times working with Sunstone.

For example, Sunstone seems to be a gay-friendly place, but I am quite homophobic, not toward gay individuals per se but regarding the gay movement itself. I am very opposed to enabling gays through measures like gay marriage or rhetoric that assumes everyone is either gay or straight and gays should feel morally justified to follow their bliss. I believe that gays have allowed themselves to be taken in sin and that nearly all of them could have resisted the temptation better, and I think once they allow homosexuality into their lives it becomes like a spiritual brain tumor that makes them retrospectively believe they've always been gay and had no choice, which I say is a self-deception. I believe that gay politics will be one of the main forces in near-future years that will weed out the goats from the sheep within Mormonism—not just those who allow themselves to become gay, but also those who sympathize with their politics. I also think that the gay issue will push Mormonism even farther out of the worldly mainstream, perhaps to a dangerous, persecution-level degree. To me, it's obviously a sign of the times that this issue has arisen to this degree in our society. Something tells me these ideas and attitudes might not fly very well in the Sunstone crowd, but on the other hand I'm very much committed to the ideal of a balanced, open discussion, as long as all sides are well represented.

Anyway, it would have been cool to get a job that I actually mostly believe in, unlike my current job where I like the people in my department and appreciate my good salary and working conditions but thoroughly loathe the MLM nutritional industry. Working at Sunstone would have taken a lot more time and effort than I'm used to giving to my day job, and maybe it could have ended up being spiritually dangerous for me in some ways. For many participants, I think Sunstone becomes too much of a replacement for the real church, and I could see that happening to me too. I know the guy who got the magazine editor job—we've worked together on Irreantum, The Sugar Beet, and Zarahemla Books—and I find myself not envying him much. He has the potential to do a really good job, but I think it will be very demanding and perhaps all-consuming.

I wonder if I will have the opportunity to compete for any future jobs at Sunstone—probably not, after this little essay. Part of me would like to see if I could rise to the challenge and really get professionally engaged in a communication situation like Sunstone, get ensconced in something I'm personally passionate enough about to lose myself in it and become a no-holds-barred evangelist (which I wasn't able to achieve even on my mission). Maybe another reason I didn't get a job this time was because my corporate salary was too high for them to match. I have offered to help them start a book imprint, if they want to pay me a reasonable professional fee, and they seem interested in that possibility for the future.
Share |
Posted by Christopher Bigelow at 6/06/2008

Hope that they go with the book imprint, that might very well make a difference.

I often wonder if I would lose my passion for some hobby or interest if it became my full-time job. I'm sure there's truth in the saying "If you love what you do, you don't work a day in your life," but I still wonder.

I agree with you quite a bit here, Chris. I share your feelings about Sunstone, and have to admit that at times I have hoped that AML would be just like sunstone only without the baggage that I hate (most participants seeming to have a grudge, an axe, whatever--and the gay thing, as well). I also agree that probably it will be the gay issue that will bring on persecution of Mormons again.

I'd love to see a Sunstone imprint. But I think it would be even better if it were an AML imprint. Then we could do it without the sunstone baggage which, I believe, limits its audience.

Stephen: I think a book imprint would be the best way for them to mine their vast archive in new, productive ways, better even than online and DVD resources.

Scott: Very true, and I wonder about that. I've heard of people getting totally burned out at Sunstone because of the demands.

Darlene: A Sunstone imprint would be mainly to repackage their own material from past magazines. It wouldn't replace my Zarahemla Books, which I will continue to do to publish fiction and memoir that I personally like. I like working independently better than working with a committee like AML, I'm afraid.

Thanks for your perspective. I'd also feel somewhat reticent to edit Sunstone (not that I'd be qualified right now.)