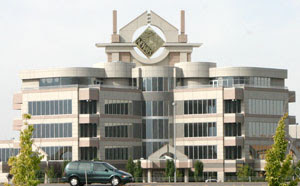 Except for a few general hints, I have exercised considerable self-discipline not to blog about work, mainly because I’ve heard so many stories of people getting in trouble with their employer and even fired. If I were to give myself free reign about work—whew, watch out. So I don’t.

But I thought I would say something about the building where I work. As you can see, it’s quite a piece of work. I actually like the building except for the gaudy logo on top, which looks to me like the gateway to another dimension. Take that off, and I think it would be a nice building.

The interior is quite well appointed, and I enjoy it aesthetically, especially after four years working in a nasty, windowless former carpet warehouse with beat-up gray cubicle walls and carpet and no proper ceiling. I work on the third floor, and since watching Super-Size Me I’ve made an effort to always use the stairs. My only real complaint is that I have a full wall of south-facing windows behind me, so I often get overheated, especially in late spring and early fall when the AC doesn’t come on as often. On the other hand, I love the view of the mountains when I wheel my chair around, especially watching the changing light and clouds over West Mountain.

What’s actually weirdest about this building is how far south in Utah County it’s located. Until I’d worked here for several months, I could never keep straight what towns lay south of Provo, but now I know all too well. I’ve always actively disliked Utah County, and now I’ve worked for almost four years even deeper in the county than I could have ever imagined. There’s really not much around here, certainly nowhere reasonably walkable for lunch (there’s a Cracker Barrel nearby, but that’s mostly just bland, mushy food for old people).

Now that I’ve lived down here for over ten years, Salt Lake is starting to feel like an unfamiliar city when I visit, which only happens 2-3 times a year now, it seems. I used to feel like it was my city, but now I feel like a stranger there and even the tiniest-bit intimidated by it (I pass it once or twice a month when going to visit my parents in Bountiful, but that doesn’t count).

I often wonder: Will I be working in this building and living in this valley for the next thirty years until I retire, or do other adventures lie ahead? The first couple of years after we got married, I tried really hard to get out of not only Utah County but also Utah itself, but now I’ve pretty much given up. After all, life here is comfortable and familiar now, not a terrible place to fade into middle age.
Share |
Posted by Christopher Bigelow at 6/19/2008