Best Movie of the Summer 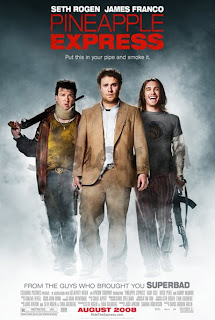 For some reason, I've seen nearly all the big summer movies this year.

Of all the movies, the one I found most entertaining and satisfying is Pineapple Express. Some of the reviewers were lukewarm on it, but I liked it better than most of them. Great mix of reality, absurdity, and action.

This movie is like Apatow meets Tarantino meets the Shaun of the Dead/Hot Fuzz guys. Seth Rogen is fantastic, but in this movie he's almost outshone by a couple of other actors, the two guys shown with him in the movie poster.

All the other movies this summer have left me a little dissatisfied, but not this one. Even Dark Knight was a little too long and complicated and overstuffed for my taste, especially toward the end.

However, I don't recommend you see Pineapple Express unless you're already a fan of Apatow and/or Tarantino movies. Let's just say that it's rated R for good reason.
Share |
Posted by Christopher Bigelow at 8/08/2008

I'm not an Apatow fan and I've kind of gotten over Tarantino (they grow up so fast), so I'm reserving my tasteless, sniggering R-rated portion of the summer for Tropic Thunder. Any project that can get groups to protest them 'cause one of their characters is repeatedly called "retard" sings to me like the sirens on the rocks.

This is surprising. I wasn't even going to see it until I saw this review. I'm curious to see why you liked it so much.

Feel free to delete this comment if you do not want it addressed here but, why have you been given non-entity status at Mormon Matters?

Yeah, I noticed that the blog owner John Dehlin deleted my two comments on his Mormon Matters post today, I assume because he loathes my rhetoric on the gay issue.

I was already kicked off by him as a permablogger some time ago, and are you telling me he's now also banned me as a commenter?

If so, oh well. I think Dehlin is a guy who's taken in worldly political correctness, and if he doesn't want views like mine on his blog, that's his choice. I don't respect him much any more, though. I think he's got a dangerous mindset and agenda that could eventually lead to disappointment for him and his family.

Yeah, he was apparently loose with the white-out on this one 'cause there was quite a bit of murmuring about disappearing comments.

I guess I'm just a jerk 'cause I'm not feeling particularly inclined to be nicer toward depressed Mormon gays than anyone else.