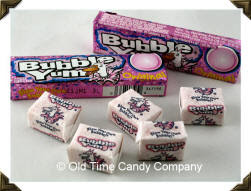 When I was in fourth or fifth grade living in the Los Angeles area, LifeSavers introduced the world’s first soft bubble gum, called Bubble Yum. Before that, all bubble gum was hard, like that yucky Bazooka stuff that takes so long to soften up in your mouth.

Wow, Bubble Yum hit me as powerfully as some kind of new drug. I couldn’t believe the experience of biting down on that soft, sweet stuff and chewing it. Unfortunately, LifeSavers couldn’t keep up with the demand in 1976, so it became hard to get. I remember having my aunt in Seattle send me down some packages, and I sold each individual piece for a quarter at school, which represented a very high markup. I think the whole package of five pieces cost only a quarter at the store, when they were in stock. (I attached a photo of today's package, but back in the day the package was red, not pink.)

I also remember the rumor that the secret to Bubble Yum’s incredible softness and consistency was spider eggs. I can still recall where I was sitting when I first heard that rumor: back in the rumble seat of my family’s sky-blue station wagon, along with some neighbor kid (of course, neither of us wore seat belts). The allegation shocked me, but it didn’t stop me from chewing, chewing, chewing.

In fact, one of the genius Jewish kids at school even memorized one of the songs from Roald Dahl’s Charlie and the Chocolate Factory and taunted me with it on the playground. It’s the one that the oompa-loompas sing to the gum chewer Violet Beauregarde:

Dear friends, we surely all agree
There's almost nothing worse to see
Than some repulsive little bum
Who's always chewing chewing gum.
(It's very near as bad as those
Who sit around and pick the nose).
So please believe us when we say
That chewing gum will never pay;
This sticky habit's bound to send
The chewer to a sticky end.

Did any of you ever know
A person called Miss Bigelow?
This dreadful woman saw no wrong
In chewing, chewing all day long.
She chewed while bathing in the tub,
She chewed while dancing at her club,
She chewed in church and on the bus;
It really was quite ludicrous!
And when she couldn't find her gum,
She'd chew up the linoleum,
Or anything that happened near–
A pair of boots, the postman's ear,
Or other people's underclothes,
And once she chewed her boy friend's nose.

She went on chewing till, at last,
Her chewing muscles grew so vast
That from her face her giant chin
Stuck out just like a violin.
For years and years she chewed away,
Consuming fifty packs a day,
Until one summer's eve, alas,
A horrid business came to pass.

Miss Bigelow went late to bed,
For half an hour she lay and read,
Chewing and chewing all the while
Like some great clockwork crocodile.
At last, she put her gum away
Upon a special little tray,
And settled back and went to sleep–
(She managed this by counting sheep).
But now, how strange! Although she slept,
Those massive jaws of hers still kept
On chewing, chewing through the night,
Even with nothing there to bite.

They were, you see, in such a groove
They positively had to move.
And very grim it was to hear
In pitchy darkness, loud and clear,
This sleeping woman's great big trap
Opening and shutting, snap–snap–snap!
Faster and faster, chop–chop–chop,
The noise went on, it wouldn't stop.

Until at last her jaws decide
To pause and open extra wide,
And with the most tremendous chew
They bit the lady's tongue in two.
Thereafter, just from chewing gum,
Miss Bigelow was always dumb,
And spent her life shut up in some
Disgusting sanatorium.

And that is why we'll try so hard
To save Miss Violet Beauregard
From suffering an equal fate.
She's still quite young. It's not too late,
Provided she survives the cure.
We hope she does. We can't be sure.

Chew On This said...

I just wrote a similar account of how life-changing Bubble Yum was for me. Then I googled BY and 1976 and found yours. I added your account to my post. Hope you don't mind.

Hey, that's great, another person with very similar memories of this defining moment for our generation. And thanks for the following link to another site that corroborates the details: