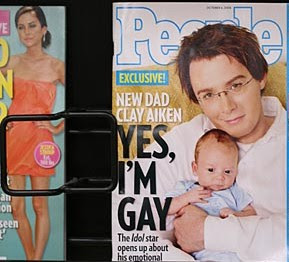 Sorry, but this picture of Clay Aiken just makes me physically ill. Seriously, I'm actually queasy about it.

It makes sense that the adversary's gay campaign earlier used someone as innocuous and accessible as Ellen DeGeneres to keep breaking down society's rightful taboos against the gay lifestyle. It was smart to start with a female, too, as people seem to have less trouble with the idea of lesbians.

But now with Aiken, we're crossed a new line by putting a soft, sweet, accessible, androgynous face upon male homosexuality, and we've added fatherhood to the mix as well. It's just going to keep on getting bolder and bolder from here, and the majority of people are going to swallow it.

In Provo/Orem, supermarkets often cover magazines that show too much sexuality on their covers. Some of the stores have been covering this Aiken People cover as well. I’m pretty anti-censorship and have sometimes taken these smut-guards off magazines just to go against the flow, but I’m amazed to say that I can relate with the impulse to cover this one.

The more young kids get exposed to homosexuality and the idea that it's equally as worthwhile as heterosexuality and an acceptable alternative for parenting kids, the more of those young kids will choose to go the gay route when facing questions about their own sexuality in adolescence and young adulthood, questions that many of them might have otherwise grown out of.

As the father of several boys, I’m on board with the idea of keeping as much pro-gay propaganda away from them as possible. I honestly can’t fathom how anyone—especially Mormons—could think that the modern gay movement is going to turn out well for our civilization. Man, this gender confusion stuff is just getting sicker and sicker by the minute, especially when you bring parenthood into it.
Share |
Posted by Christopher Bigelow at 10/01/2008

OMG, are you serious? As a fellow Mormon I'm embarrassed by your bigotry and your ignorance.

Once again, I couldn't agree with you more. Thanks. It's good to know there are a few of us out there who still know right from wrong.

But now with Aiken, we're crossed a new line by putting a soft, sweet, accessible, androgynous face upon male homosexuality, and we've added fatherhood to the mix as well.

Because the last thing we'd want people to think is that there are nice gay men out there who also happen to be fathers. Obviously, those attributes are fundamentally incompatible with being gay. We want to perpetuate this idea that gay men are all creepy, misguided pervs who are one step away from pedophilia.

A person who is intolerant of opinions, lifestyles, or identities differing from his or her own.

It doesn't sound to me that Mr. Bieglow is a 'bigot'. He's merely expressing a strong opinion about to what degree the gay lifestyle should be put on a pedastal. He's not demanding gays be burned at the stake!

I would say 'bigot' more describes the proponents of the gay lifestyle as they almost seem universally intolerant of anyone with a different opinion--no matter what it is.

Um, huh? Now it's gay people who are bigoted? Does that really make sense to you, lurkin'? Have you (or the poster) ever been threated with eviction by a gay person? Chased by a pick-up truck full of a gay people who are jeering at you? Denied a hotel room? (All these things have happened to me for being gay.)

Come on. Be intellectually honest. You're reaching a point where words have no meaning. I'm sure there are gay people who are bigoted in some ways, just like there are bigots in any community. But if what Mr. Bieglow is not bigoted against gays (by your own definition), I honestly can't think of what would be. Imagine the same post written about African Americans or heterosexuals. Would that be bigoted? Why is it different for gay folks?

Imagine the same post written about African Americans or heterosexuals. Would that be bigoted? Why is it different for gay folks?

Um... blacks and heterosexuals don't threaten the divine structure of the family? Their lifestyles weren't condemned by God in the scriptures? Just spit-balling here...

By the way, the baby on Aiken's lap looks legitimately worried.

Anonymous #1: I'm embarrassed by your spiritual blindness and your apparent willingness to buy the world's definition of "gay." Same-sex attraction is a real temptation to be dealt with, but giving up and embracing the gay lifestyle is a serious abomination. Like so many, you have been deceived. Wake up!

Steve M.: Anyone who has chosen to identify himself as "gay" has given into some very serious, soul-destroying temptations and deceptions.

I personally don't think children should be exposed to the gay lifestyle in any form, lest they grow up to follow it themselves. But that doesn't mean some gay people can't be good parents on some levels. However, it's not something society should encourage as being equally as good as heterosexual parenting, and anybody who takes any steps to bring children into the world outside of a heterosexual marriage is deep in sin and error, period.

And I never said anything about pedophilia, dude.

My dictionary says that a "bigot" is "a person obstinately or intolerantly devoted to his or her own opinions and prejudices."

I guess God and Jesus are bigots, then, because I'm devoted to THEIR opinion about gay marriage and same-sex issues, as made known to me by the Mormon church and my own spiritual understanding/reasoning, which I believe is inspired by God.

People who go against God's will are the real bigots, because they're just following their own opinions and prejudices, as peer-pressured by the fallen, uninspired worldly civilization.

Anonymous #2: Being "gay" is a choice to adopt a sinful worldly lifestyle instead of resisting same-sex temptations, as God has commanded.

God has not commanded blacks to resist their racial identity, because that would be impossible. He has commanded heteros to channel their sexual urges only into marriage.

Personally, I can tolerate letting those who have embraced the gay lifestyle have certain legal rights as couples, even though I think they have made a horrible mistake and damned their eternal progression unless they repent. And I completely condemn anyone who beats up on gay people or discriminates against them unreasonably, without any justified reason.

However, in certain circumstances I would discriminate against a person who has proclaimed himself gay. For example, I would not want an openly gay person to teach or babysit my kids, not because of fears of pedophilia but because I don't want my kids getting the idea that being gay is good and acceptable, even though many gay people are able to come across as QUITE happy about it. I'm not saying my kids can never be around openly gay people, because we have those in our extended family and we enjoy their company, but I would not leave my kids alone with those people because of the dangers of brainwashing. Because guess what—those who have chosen to give in to their same-sex temptations want others to do the same, because it justifies them in their own decision.

Even after gay cousin X makes an appearance, I feel a need to explain to my boys that he has made a big mistake in his life. I haven't really figured out how to do this yet, but I don't want one of my boys to feel a same-sex urge and think, "Well, look at cousin X, nothing bad happened to him, so I'll explore it too." That's the horrible thing about the gay movement becoming so bold—it sets such a bad example for our kids and confuses the hell out of them, especially the ones who may feel some glimmers of same-sex interest themselves.

At least this issue is eliminating the fence-sitters.

I don't understand why LDS gays continue to berate the issue. The Lord doesn't budge and neither does His church. If you're determined to get compromises, acceptance of your lifestyle, erosion of principles, there's the world-- go embrace it.

And to members who take exception to Prop 8 and the Church's position on same-sex issues: If you can't recognize that President Monson's admonition comes from the same source Samuel the Lamanite's did, then you seriously need to reanalyze your doctrinal beliefs.

Actually, I have been discriminated against by the lesbian community on several occasions, purely because I was accompanied by my husband to one of their so-called establishments. You see, I was there with my gay sister, to show her that I love her, not necessarily her life style. But what does she do? She shoves her crude, godless, pornographic recreational habits down my throat by tricking us to meet her at a gay bar. Honestly...who's forcing what on who here?

Hi, I'm anonymous #1 (And I'm no coward. I'll tell you my name and ward if you must have it)- You know what you remind me of Chris? Charles Lindbergh. Know why? When I was a boy he was a hero of mine, I loved reading about his flight across the Atlantic in the Spirit of St. Louis. Later, when I learned that he was a rabid anti-Semite and a Nazi sympathizer I was sick that ever admired him. Along those same lines, I've always loved the "Sugar Beet." Sure, it's a blatant "Onion" rip off but it's hilarious and it pokes good-natured fun at our faith showing that we have a sense of humor. Now that I know that you, a rabid bigot, are behind the "Sugar Beet" I'll never read it again and I feel sick that I ever enjoyed it. I also plan on telling all of my open minded LDS acquaintances about you and your beliefs.I imagine that will sour them on the Sugar Beet, too.

Anonymous, you sound a little desperate. Comparing me to the Nazis is just utterly ridiculous. I think people who chose to identify themselves as gay should be free to do as they wish, as long as they don't infringe on the rights of others, such as my religious right to define marriage a certain way, classify sodomy as a sin, and protect my children from gay propaganda. If I were like a Nazi, I would be advocating the extermination of gays. I think I'm a long ways from that.

The Sugar Beet has actually been very popular among gay people, and we've done some funny stuff on gay issues. Did you see my recent gay-sympathetic piece on "Gay Humility Parade Keeps Low Profile"? I posted it just a couple weeks ago on this blog, and it was published in Sunstone magazine. But if you want to try to use the reverse-discrimination of boycotting the Sugar Beet in order to combat my alleged discrimination, you just make me laugh.

Dude, you're eventually either going to have to get on board with the Church's stand on homosexuality or I predict you will weed yourself right out of the Church. My stand is virtually the same as the Church's stand, so I guess pretty soon you'll start boycotting the Church too, if you haven't already. Good luck with that!

Ah there you go again.