Metallica Is Back in Black 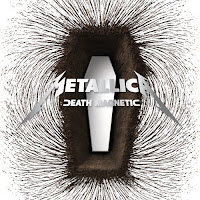 At different times I've owned practically all of Metallica's albums, but I've grown tired of most of them pretty quick and gotten rid of them. Except I still love the black album, which I consider the bull's eye in the middle of Metallica's career.

The stuff before the black album isn't melodic enough, and the stuff after isn't either, but in a different way. Their worst album is their last one, St. Anger, which I consider downright unlistenable. But that black album, that's the stuff, probably in my top-ten albums ever.

I'm pleased to report that Metallica is back in the groove with their new album, Death Magnetic (cover pictured). It's a return to form on instrumentation, with plenty of phenomenal guitar. It's almost as melodic as the black album but with longer songs that aren't as radio friendly.

I don't think it's quite as good as the black album, but it's nice and crunchy and delicious, and it's a keeper. I'd like to see Metallica in concert someday.
Share |
Posted by Christopher Bigelow at 10/24/2008

Hey it's been a fine autumn for all old rockers-- AC/DC's "Black Ice" is also very listenable and has restored my jones for the band. I would very much love to see AC/DC in concert. At least before Angus starts slipping disks.

Someone at work just gave me the new AC/DC yesterday, so I look forward to getting acquainted with that too, soon.

Saw Metallica at the Salt Palace in '89. My hearing was never the same. Glad to know they have their act together again.