My Life-Altering 1985 Trip to Boston 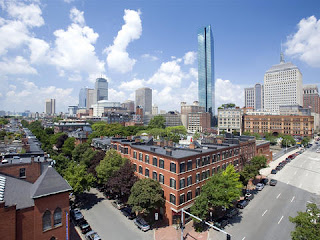 In 1985 Western Airlines launched a nonstop flight from Salt Lake to Boston, and for a short time they offered round-trip tickets for only $52 because it was flight #52. My friend Rick and I snapped up tickets and went on the trip.

That was when I was smoking pot every day, and of course we got high before the flight, because we thought it would make it more fun. Then I ran into the Hill family from my parents’ ward at the airport and said some really inane things, and I’m sure they wondered what was up.

We stayed at a place called the Chandler Inn Hotel in Boston’s South End (the picture above is the view from the hotel’s roof). When we went downstairs to the restaurant/bar our first evening, we realized it was a raging gay place, and they probably thought we were a cute little couple vacationing together. The next day Rick bought a Penthouse at a newsstand, and we both took turns with it in the bathroom to assert our heterosexuality. When the maids emptied our ashtrays, they fished out our roaches and left them perched on the edges of our clean ashtrays.

I don’t remember what we did in Boston besides walk around, but midweek we took the train down to New York City. We walked our butts off and rode the elevators to the top of the World Trade Center and bought tickets to A Chorus Line on Broadway, but we got high in the theater restroom right before the show and both promptly fell asleep. We were planning to explore the night life that night, but we were so tired that we just ordered some New York pizza delivered to our Holiday Inn room on West 57th. On the train back to Boston we got in trouble with the alcohol-serving guy for getting too tipsy and becoming boisterous. In all honesty, I think our substance abuse detracted from the trip.

This trip made a huge impact on me, and I really wanted to move to the East Coast. During our walking, we stumbled onto Emerson College, and after my mission I was somehow able to wrangle attending this small, expensive private communications college on my own dime (including about $10,000 in student loans). I will write more about my Boston school years sometime soon, which were some of the happiest yet most lonely years of my life.

Even though I was in the midst of rebellion and had shown myself to be irresponsible in some ways, my dad loaned me his credit card to use on the trip, including for Rick’s expenses. He must have sensed that it was an important trip for me. And I’m pleased to report that both Rick and I paid him back for all the charges before too long.
Share |
Posted by Christopher Bigelow at 10/15/2008