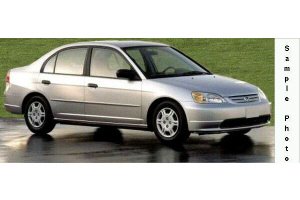 When I married Ann in 1998, I inherited her little 1989 Geo Prism, a crappy little mosquito car that I drove for the past eight years—but I was grateful to have a car at all, since I came out of my divorce without one and had been borrowing the cars of siblings on missions, etc. However, a few months ago I rear-ended somebody on the way home from Café Rio, and since I didn’t have collision insurance on the old Prism, I spent just $200 or so at Maaco to get her minimally safe for the road, with the hood still looking crunched. Anyway, since then I’ve just been waiting for something to go wrong, and sure enough the alternator quit last week, so we junked it.

I was going to try to find a car for about $9,000, which is the amount we recently received as a gift from my very generous mother-in-law. We visited three used-car dealerships, only one of which (CarSmart in Springville, UT) had high-pressure salesmen who bugged me. We found several cars in our price range at Classy Cars in Orem, but then a silver 2002 Honda Civic that had just come onto the lot caught our eye, and we took on an additional $3,000 in debt to get that one. It is in much nicer shape than the ones in the lower price range, and it has only 42,000 miles.

So anyway, I’m enjoying driving it around, although it gives me some anxiety to hope it stays nice and nothing goes wrong with it. I’ve always liked Hondas and wanted to own one. (My past cars I’ve driven have included Mazda and Saturn, and I feel no great loyalty to either one.) The stereo system isn’t very good, so I’ll be tempted to find a few hundred dollars sometime soon to update that. However, it has a tape player, and I bought a little tape adapter for my iPod, which works much better than the FM adapter I tried a few weeks ago and then returned.

I have had many years in my life when I walked and used public transportation, and in some ways I miss those days, but I guess I’m just a suburbanite now…
Share |
Posted by Christopher Bigelow at 3/14/2006