A Couple of Flattering Pictures 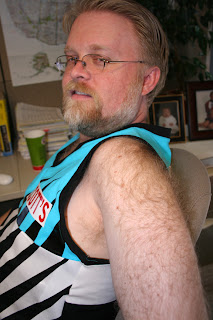 My question is, why me? Why did my shoulder hair get this thick and profuse? I think it came after my chemotherapy in 1994, which killed off most (but not all) of the hair on my head and body—evidently, it grew back with too much of a vengeance. Another possible explanation is that I had several terrible sunburns on my shoulders as a child, so maybe my body grew thick, luxuriant hair as protection.

One thing that helps me look a touch less werewolfish is that my hair is light in color. I sometimes fantasize about running my beard trimmer over my shoulders, but I'm sure that would be a mistake.

Once a lady was giving me a haircut, and she was trimming my neck hair. She kept going down and down, evidently assuming the hair would end at some point . . . but it didn't, and she finally stopped some ways down my back. As the hair grew over the next few days, my shirts kept catching on the stubble back there.

One time when I was climbing out of the hot tub at our timeshare condo, I heard one teen boy say to his friend, "Dude, my dad's even hairier than that guy."

I see a lot of peach fuzz on my son Austin, so I wonder if he'll be really hairy too.

The photo below was discovered by Paul Browning. Apparently, I lived a previous ancient life as a naked turtle rider. I have offered to ride a turtle naked around our bedroom in broad daylight, but so far Ann has declined. 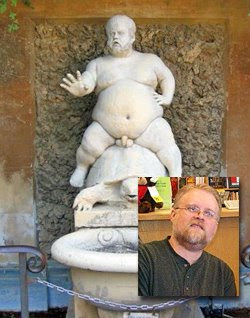 You've got way too much time on your hands to be doing this much blogging. Get a life and no I prefer not to see you riding naked around the bedroom on a turtle.

Dont listen to Alb. And take comfort that all great men throughout history were hairy apes like us.

Looks like that turtle shell is squishing your junk...it was good to see you dudes last week. Daze.