News about My Novel Kindred Spirits 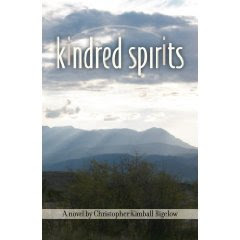 It's been almost two years since Zarahemla Books published my novel Kindred Spirits, and the past year has been fairly quiet for the book, with just a trickle of sales and no reviews appearing anywhere. However, just in the past month, interest in the book has picked up in some fun ways.
First of all, a Catholic professor at the College of the Holy Cross in Worcester, Massachusetts, has chosen the novel to use in his class on Mormonism. He teaches the students about newer religions, and he's developed a real interest in Mormonism and has used my Mormonism For Dummies book in the past. This is the same fellow who recently came out to Sunstone to give a Freudian perspective on the Mormon satire I've written and edited, The Mormon Tabernacle Enquirer. The novel is full of Mormon strangeness, so I wonder just why he's interested in it and how his students will receive it.
Secondly, the BYU English Department has invited me to come read from the novel in October. When the professor was talking to me, I said, "So what do you want me to read, some satire or some fiction," and she said, "Oh, definitely from Kindred Spirits, but try not to pick something that could make people uncomfortable." The novel does have a fair bit of sexuality, but apparently they've read it and see enough literary value in it to invite me. They're actually giving me 45 minutes in an auditorium, paying me $200, selling my books on site, and even taking me out to lunch afterward. I got a real kick out of this invitation and appreciate the support from BYU.
I wish I had time to work on my next novel, but as I've already complained, I'm deep into freelance writing and editing through at least the end of the year...
Share |
Posted by Christopher Bigelow at 8/22/2008

Loved reading this, thank you