My Take on LDS General Conference 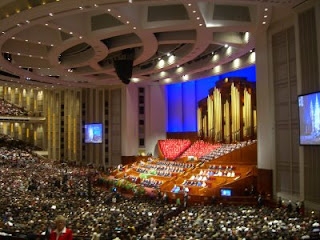 My bottom line: It's just too much.

We usually manage to turn on the TV for most sessions of conference on both days, but I usually get involved with reading or writing something else and tune most of it out. I suppose I absorb some goodness, but I miss most of it.

I do always attend the priesthood session with my dad and his brothers, although my 13-year-old son doesn't seem to like me much anymore and doesn't come with me every time. (He's pulled away in other areas too, not coming over to my house anymore because he doesn't get along with my wife and deigning to have dinner with me only about once a month.)

When it comes to religion, I'm still dedicated to the church, but a little bit of spiritual practice goes a long way with me. In other words, I nibble rather than gobble. I suppose that's not exactly "hungering and thirsting after righteousness," but it's better than nothing. I guess I just find so much of it so boring and repetitive, and along the same lines I find people's churchly personas and expressions so calculated and inauthentic, so posed.

For many years I would fib to myself that I would read the conference talks when they came out in the Ensign, but I never have done much of that, not even when I worked at the Ensign. I guess I have too much hunger for things that are original and provocative, and I just don't get much of that from conference talks. Plus, I'm busier and more mentally fragmented these days than ever, and frankly I think my attention span is getting worse as I grow older.

For me, conference is like someone plunking down a giant mixing bowl full to the brim with oatmeal and saying I have to sit there and eat it all. I can eat a few spoonfuls of it and feel some virtue, but pretty soon my gullet starts to shut down because it's just so goopy and bland—again, a little goes such a long way. When it comes to religious things like general conference, the 95% rule applies for me: 95% of it seems boring, dull, and repetitive, while only about 5% really comes to life for me. This same ratio was also true of my mission and is true of church and temple attendance and of reading the scriptures.

Most other Mormons are no doubt more spiritually in tune than I am and get more mileage out of religious practices than I do. My spirituality seems to be touched more by the human arts, especialy music and literature, than by packaged corporate religion like Mormonism, which so often leaves me feeling bored. But undoubtedly that's more my fault than Mormonism's, an idea supported by one friend's rather frank assessment of my spirituality:

While I admire many things about you, I have always considered you one of the least spiritually astute human beings, Mormon or otherwise, that I have ever met. (And yeah, while I don't like Mormonism, I have met a fair number of spiritually astute Mormons.) I find you so lacking in spiritual maturity and depth; so deficient in real spiritual virtues like self-awareness, compassion, and a hunger for truth (the fact that you just don't think it's important to read scripture says a lot to me); so unable to wield anything but the crudest vocabulary and assumptions with regards to spiritual concerns, that I always wonder later why I bother to talk to you about these things at all.

Whew, talk about ripping me a new one. I do admit that I'm a rather unserious, light-minded person in many ways. So anyway, if you hear any particularly powerful talks that I need to watch online or read later, let me know. But what I really wish is that the church would just have one two-hour general conference session on Sunday and call it good...

Okay, okay, so the priesthood session was overall better than a mere 5%. I quite like Elder Uchtdorf, and although Elder Scott's delivery has some weird voodoo, his message is often great, including this time. Something about Elder Eyring always makes it hard for me to concentrate on him, and I thought Pres. Monson was rather uninteresting this time.

I agree. Uchtdorf was memorable. Woke me up out of a sleepy daze.

Cousin i couldn't agree with you more
DK2

All I can say is I am grateful for the DVR! Now I can doze off in my 7-layer dip guilt-free, sprawled on the floor with the Sunday paper, knowing I won't miss a morsel of the spiritual feast-- inflections, expressions and all.

Was it just me, or were some of those staged, sing-songy general conference speaking styles particularly pronounced this time?

Especially Pres. Monson on Sunday afternoon. My wife did a hilarious impression of his swooping, feel-good cadences. I wonder how/why this style of speaking evolved. Maybe they're envious of the tab choir getting to sing?

Here's a terrific summary of the conference: