Giving It Up for Pinback 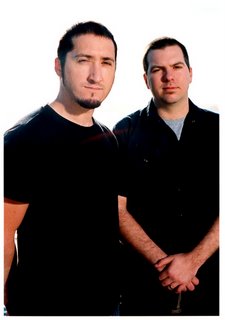 The other night I had a fun night out with my parents and siblings. We met at my sister Stacey's cute little bungalow on Hollywood Avenue near State and 21st South in Salt Lake, and I suggested we all go for smothered burritos at La Frontera, which we did. Out of my nine siblings, six were present. I like the burritos at La Frontera because they're good tortillas and I love their chile verde sauce.

Anyway, after that we all went to the new live music venue at the Gateway called the Depot. It's located inside the grand old Union Pacific building, and when we passed through the big main hall my mom said it brought back sad memories of seeing off her parents for trips away via train. My parents, who are in their early sixties, were probably the oldest folks in the room, which reminded me somewhat of the old Zephyr Club in size and layout. (My parents like a lot of contemporary music: I've attended Moby and Rusted Root concerts with them, and we took my dad to Weezer for father's day one year.)

The band we saw was called Pinback. I liked them quite a bit, although the older I get, the less comfortable I am with the standing and the loudness at concerts. The band is two main guys, with three other supporting musicians. I would say the band I know who they sound most like is Jimmy Eat World. At times they had three guitars going, at other times three keyboards. I really enjoyed quite a bit of the music and borrowed some CDs from my sister, although their latest release had the wrong CD in it... I may have to break down and buy a Pinback disk or two.

Here's a description of Pinback from Amazon.com, perhaps a review of the latest album but maybe an earlier one: "The contemporary crowning of drum machines, samplers, and synthesizers have led to a brigade of block-rocking beats, each successive blast becoming louder, leaner, and meaner. Meanwhile, Pinback create a more laid-back blend of pop music, augmenting gentler acoustic sounds with contemporary technology. The result is rainy-day music for the next millennium. The catchy fingerpicking on "Hurley," bound with a simple snare and bass, recalls early Folk Implosion; all snowy sighs and melancholy melody, it's easily the disc's strongest track. A couple of cuts are so nonthreatening they recede into soft-rock background music, but the multi-instrumentalist duo Armistead Burwell Smith IV (formerly of Three Mile Pilot) and Rob Crow deliver a mostly satisfying bouquet of thoughtful, somewhat spooky electro-emo pop."
Share |
Posted by Christopher Bigelow at 5/01/2006