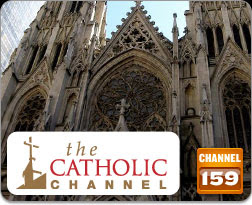 My Mormonism For Dummies coauthor Jana Riess and I recently gave an overview on Mormonism on Gus Lloyd's "Seize the Day" program on The Catholic Channel, which is carried on Sirius Satellite Radio. We were the first interview in their series with the authors of religious Dummies books.

We conducted it via phone, and I think it went OK. The show passed by extremely fast, and we barely scratched the surface. I don't know if I made Jana uncomfortable when I told about how we believe the priesthood fell away after the New Testament apostles and had to be restored—she's way more ecumenically minded than I am and doesn't really seem to believe in the Great Apostasy, or at least in the ways Mormons often discuss it.

I wish we Mormons could have a version of this satellite radio station. But it would have to be run by an independent group that would be willing to take some risks with content and maintain a truly open format, to keep it provocative and interesting—not quite to the degree of Sunstone, perhaps, but not watered-down "uplifting" pap either.

I suppose some Utah stations like KSL and KBYU may do some of this kind of thing already in Utah, but I think it would be great to have a full-time national LDS-centric channel in this format, a combination of "modern talk format and open dialogue" putting Mormon spins on "issues in the news and on the mind of the listeners—everything from what's happening in the church today, to the headline stories of current events and politics, to the latest in the world of entertainment, the arts and sports."

In other media-related news, today I sat for an hour with a documentary filmmaker who's making a show for Covenant about Mormon folk beliefs and faith-promoting rumors. I think I gave him some good sound bites here and there in my ramblings, and it will be interesting to see if I make it into the final product, which is due out this October.
Share |
Posted by Christopher Bigelow at 5/25/2007

Chris, why don't you make a proposal to Sirius with your idea? Seriously.

do you know if they are going to rebroadcast your interview. I looked in their website and didn't see an archive. I would love to hear it if you can get a copy.