A Lovely Trip to New York 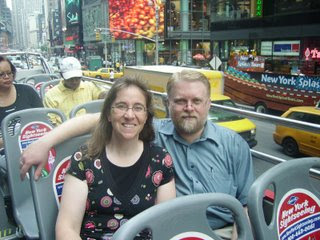 Ann and I recently left behind our kids for a wonderful five-day trip to New York City. We had a fantastic time, and Ann missed and worried about the kids less than she'd feared. I'd rank it as my favorite New York trip ever. Here are some highlights:

First, we indulged a lot of time and money on seeing three Broadway shows and one Off Broadway:

Spring Awakening: This teen-sexuality rock musical was quite raw and compelling, but I think Ann would have preferred not to see it had she known what it was, and even I thought they could have cut down on a couple of rather explicit elements and still carried off just as powerful of a show. Overall, though, I liked it a lot, and it ranks as one of my top-three Broadway shows because of the good music and some of the themes and emotions it portrayed. I liked it much better than Rent, to which it's been compared.

The Year of Magical Thinking: I had read Joan Didion's memoir upon which this is based, about the death of her husband and illness of her daughter, and I found Vanessa Redgrave's one-woman show quite well done. This is the play upon which we spent the most money, having bought premium tickets in advance, and yet it was really just Redgrave monologuing onstage with no real sets or anything. Still, I'm glad we saw it. However, I experienced the worst cell phone interruption I've ever suffered, when someone let their phone go for quite a while. It was such a quiet play that you could hear everything, including outside noises, and the cell phone really broke the spell for me, and it took me several minutes to get back into the deep emotional groove of the play. Redgrave must have heard it too, but she soldiered on.

Facing East: We ventured down into gay Chelsea to see Mormon playwright Carol Lynn Pearson's play about a Mormon couple dealing with the suicide of their gay son, with the whole Salt Lake cast transferred to New York through the help of a wealthy benefactor. I thought the play was well done and thought-provoking, although I probably wouldn't go as far as Carol Lynn would like in believing we should accept homosexual orientation at face value. I sat right next to Carol Lynn during the show, and I think she was a little nonplussed afterward when I compared it to her short film Cipher in the Snow. After the play we chanced to meet her in the subway and chatted again for a while, and then a couple of days later we found ourselves on the same flights home and enjoyed a two-hour lunch with her in Atlanta. She declared that we warranted an entry in her synchronicity diary. I still believe that homosexuality is essentially a sin, but maybe I can learn to be less judgmental and more accepting. I'm currently reading an incredible essay in the current Dialogue by a gay man telling about his spiritual journey, and I'm finding it rather moving in his honest portrayals and bold spiritual reasoning, even though I bristle at some of his assertions and implications. The bottom line is that this whole area is worthy of more thought and soul-searching, and it may turn out to be more complex than many of us thought.

Spelling Bee: I pretty much chose the previous three shows, so Ann got to choose this one. It was definitely very entertaining and funny, much more enjoyable than I expected. (We would have liked to see Wicked, but it's still hard to get those tickets. I read the book and didn't love it or hate it, but I heard the musical is really good. Maybe we'll see it when we go to London this April for our tenth anniversary, if that trip works out.)

Well, that's probably enough for one post. I'm glad I saw mostly more serious, less fluffy shows, as last time I was in New York I saw two popular puff pieces and, while they were entertaining enough, I felt dissatisfied (Dirty Rotten Scoundrels and The Producers). But this time I definitely came home feeling full, as far as shows go.
Share |
Posted by Christopher Bigelow at 6/11/2007

Yes it was, a lovely trip that is. Thank you for taking me with you!