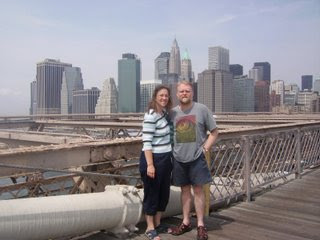 Here are some more highlights of our trip to New York:

New York state of mind: First, let me just say that New York really stirs up mixed thoughts and feelings in me. On the one hand, it boggles my mind to witness and comprehend the scope of this city, to ponder all the creative activity that goes on here, the scale and extent of the buildings, the unbelievable real estate market, etc. I can't help feeling that I'm missing out by not living or working here, and returning to Utah makes my life feel so incredibly small, dumpy, and backwaterish. On the other hand, at age 40 I'm aware that I lack the ambition and accomplishment to make it in a place like New York. I don't feel any desire or aptitude to climb a corporate ladder and earn a high-enough executive salary to thrive in New York, let alone become upper class here in Utah. While I've made some efforts with independent creative pursuits, I have not yet found any indication that I could significantly profit from them, certainly not enough to support my family in an expensive Eastern city. Anyway, I love to visit New York because I find it endlessly fascinating and stimulating, but the city also makes me struggle with feelings of envy, inferiority, humility, etc.

Book Expo America: The main thing that triggered this trip was my British timechart publisher's invitation to meet him at this huge, mind-boggling book convention. He paid for my flight, and we were able to pay for Ann's flight and our hotel south of Times Square with Delta and Marriott reward points that we've accumulated. So our only expenses were food and entertainment and incidentals, but of course we blew over a thousand bucks on that, since New York just sucks money out of your wallet at every turn. Anyway, I spent a couple of mornings at the book show and came away feeling pretty nonplussed and overwhelmed as both an author and a publisher. I don't feel much impulse or interest to play the schmoozing game—I strolled around a little bit and talked to a handful of Utah book people, but I didn't gather any of the freebies or anything. Ken and I are working on a Hollywood timechart possibility now and talking about maybe doing one on English literature. If this Hollywood thing flies—and it looks like it will—I will be focusing on that from about September 2007 through March 2008. It will take a ton of work and essentially put Zarahemla and my novel on hold for at least six months, but hopefully I will make some good money on it.

Missing my bro: I was sad not to get together with my brother Jeff, who is a medical resident up at Yale, about a 90-minute train ride away. However, he was embroiled in ICU rotations and couldn't come down to the city, and we had enough going on that we chose not to spend a day to go up and visit him. Oh, well—I've visited Jeff twice previously when he lived in Manhattan during his med-school years, and we will see him in Utah in a couple more weeks.

Meeting my agent: I did finally get to meet my literary agent Linda Roghaar in person, which was interesting—people who you've known strictly through phone and e-mail never turn out how you imagined them, which is always surreal. Linda is talking about having me turn a couple of books into downloadable audio files, and we'll see if anything works out with that (I'm a little skeptical of her business model, which is somewhat experimental). I wish I had a project going that Linda could market to national publishers, but my next two books will likely be the Hollywood timechart and my latter-latter-days novel for the Mormon market. Oh, wait—maybe Holly Welker and I will get our missionary anthology proposal off the ground this year, and we'll give Linda first crack at trying to sell it, if she wants.

Odds and ends: I quite enjoyed walking across the Brooklyn Bridge (see photo above); having lunch at the Carnegie Deli with my Mormonism For Dummies coauthor Jana Riess, who is always so gracious and interesting; and riding the double-decker tour buses. The only thing I regretted was not spending 2-3 hours in the Met, but it closed earlier than we were expecting so instead we went to the Guggenheim for my first time, which was under construction and half-empty. The first time I went to MOMA I absolutely loved it but the last time I didn't enjoy it as much for some reason, so we didn't attempt that. I tried to hook up with sci-fi author Bill Shunn, with whom I've corresponded some, but he forgot our appointment at the Moonstruck Diner on Madison Avenue, so Ann and I walked a few blocks through the rainy morning just to enjoy breakfast alone. Shunn is somewhat fascinating to me because we share a similar age and background but he chose quite a different path than I did, a path I might well have chosen too (leaving the church, living in New York, not having any kids, developing a taste for scotch, trying to make it as a writer, etc.). I've invested quite a bit of treadmill time in following Shunn's podcast, in which he chats about his life and serializes chapters from his interesting missionary memoir.

Anyway, it was a fantastic trip, and I hope to return again to New York City before too many years, maybe take along some of our older kids next time.
Share |
Posted by Christopher Bigelow at 6/11/2007

How about a nice big "foldout" book about the history of music? I would buy 25.

Hey CB, I liked your response on Darlene's blog yesterday. I sometimes think maybe I am dancing with apostasy because my non-church friends, or as one neighbor puts it, my tribe are far more important to me than the lukewarm relationships I find in our ward. Oh well. I agree with what you said and can aver that close friendship is just as important to at least one LDS person (me) as to non-LDSers.Have a wonderful day! Bye now, Kathryn