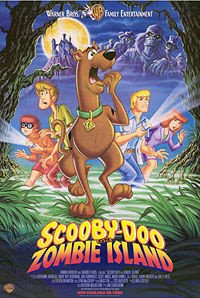 Our four-year-old Kimball recently received a slip of paper from Primary printed with his part in the upcoming Primary program. It said something like, "I love Heavenly Father, and Heavenly Father loves me, and he knows that I love roses."

It's true that we do have some rose bushes growing in our yard, but I had not been aware that Kimball particularly liked these. I decided to do some investigating, and here's our conversation:

Me: Kimball, did someone in Primary ask you what you love, and did you say roses?

Ah, I think I see what happened. Some sweet, precious Primary sister couldn't let that through, so she thought about the Bigelows and remembered our roses, and she plugged that nonsense into Kimball's part.

My kids are all nuts about Scooby-Doo, and I remember liking it a lot at their age too, although it doesn't hold up as well to adult viewing as several other classic cartoons do. But nonetheless, I think I may coach Kimball to go ahead and say what he really likes from the pulpit, rather than reinforce this Mormon obsession with saying what we think everybody else wants to hear us say....
Share |
Posted by Christopher Bigelow at 9/04/2008

Does this clear me to bear my testimony of the important place Judd Apatow and David Lynch films occupy in my spiritual development? Because I’ve always wanted to just really silence a sacrament meeting.

They have the kids write their own parts in our ward. Ben's class was assigned the topic of what do I think about Jesus. The teacher had them draw a picture first. He drew dark red and black scribbles and said it was a volcano so the teacher was a little worried. But when she asked him what he thought of Jesus he said, "He is a great man. I think he is the Messiah". So that became his part. So his teacher told me later - he can draw all the pictures of volcanoes and fire burning up the church he wants but she was awe-struck when the other came out of his mouth. I actually think he was quoting a Living Scripture video we watch on Sundays but I didn't want to tell the teacher that. Funny kids. Excited to see you'all later this month.

I'm older than you, Chris, and I loved Scooby as a kid, too. You have to admire its resilience. Remember around 9 years ago when The Blair Witch Project came out and they had a Scooby-Doo marathon, complete with Blair Witch-esque Scooby interludes between episodes? Brilliant!

Way to not let your kid be pushed around, heaven forbid. Should I have capitalized heaven??

You're a bad boy. I'm going to coach him to be a good little mormon boy and say he likes roses. Then we will see who he respects more, me or you.

Ha, ha, I won. Today was the program and he said roses.