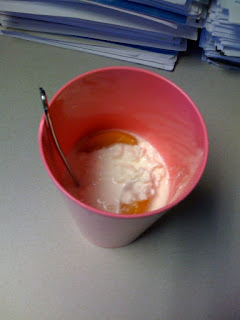 I didn’t used to eat any breakfast except a Coke. But within the past year or so, I’ve gotten into the habit, mainly because they started cracking down at work on arrival time, so I was waking up earlier, and that somehow made me feel hungrier.

However, I certainly didn’t have time to eat at home, so I started bringing things to the office. I absolutely despise all forms of breakfast cereal, so my first regular item was apples and peanut butter, but I tend to eat too much peanut butter when I do that, great big brown gobs of it (and only Jif smooth, which I was raised on—anything else is yucky).

Then I remembered that my friend Junko used to bring me a freshly boiled egg on occasional mornings and how pleasurable one of those is with salt and pepper, as long as it’s still warm. So I got my wife into the habit of making me a couple of boiled eggs on Tuesday and Thursday mornings, the same mornings we both exercise (me on the treadmill, her at that mysterious womanly gym called Curves). That covers only two days, but I also usually have a big egg-bacon-and-hash-brown breakfast over the weekend, so I don't want to overdo the eggs.

Then somehow I remembered that, although I always loathed the appearance and taste of cottage cheese as a child, it goes very well with sweet canned fruit, such as pineapple, pears, or peaches. So I started eating that for my breakfast on Monday, Wednesday, and Friday.

Enter the pink cup. My coworkers groan whenever they see me approaching my cubicle with my familiar pink cup, which I use because it’s tall enough not to spill in the car on the way to work. (I used to smuggle cans of Coke to church in the same cup and sip it from inside my backpack with a straw, but now I don't stock Coke at home anymore because my kids were drinking too much of it.)

For some reason, my coworkers don’t like to watch me shovel heaping spoonfuls of lumpy cottage cheese into the wet, pink hole at the center of my beard. They especially don’t like it when a curdle falls off my spoon and sort of dribbles down my chin hair. One guy calls it eating my "curds and whey." But I have to admit I get a kick out of eating it in front of them, and sometimes I even bring my pink cup to morning meetings.

Here’s to cottage cheese from a pink cup three mornings a week. Cheers!
Share |
Posted by Christopher Bigelow at 9/29/2008

Yum, I love cottage cheese and fruit. But it's the best on garden tomatoes with a little salt and pepper- mmmmm. We go between cracked wheat (which, strangely enough my kids love) and pancakes. Occasionally when I'm feeling rich, we'll load up on eggs- soft boiled on toast, scrambled with onions, peppers, cheese, or Jake's favorite- fried. This morning we had heart attacks for breakfast- good ol' Mickey-Dee's (a personal favorite).

That is so funny, because I take cottage cheese with canned peaches 2-3 times per week for lunch and all of my fellow residents give me grief about it. Only difference is that my mouth is not surrounded by a beard.
-Daze

I hate the remains of the dried on cottage cheese when the pink cup comes home. I always feel like I need to soak it in soapy water for a few days before I dare put it in the dishwasher.