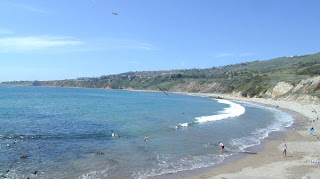 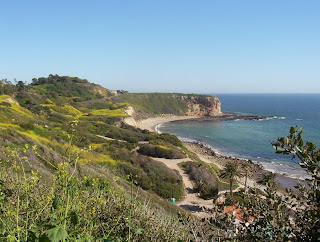 Growing up in Southern California, we often went to a nearby beach on our Palos Verdes Peninsula called Abalone Cove (I've included two photos of this beach from different angles). Located at the base of some cliffs, it has some sandy areas and some rocky areas with tidal pools. This beach never seemed to get as crowded as the more popular beaches up in Torrance and Santa Monica or down in Newport Beach and Laguna Beach.

There was at least one summer when my mom took us to Abalone Cove several days a week, and I loved spending hours exploring the rocks and body surfing. As an adult, I don't really like being outside in nature all that much except at the beach, which I still love. Something about the ocean is very soothing to me and takes me out of myself, and I love the whole sensual package of the beach, the sights, sounds, smells, tastes, and touches.

If we lived near a good beach, I would probably take my kids there every Saturday during the warm season. I wish we had enough money to live in Southern California, but maybe it will fall into the ocean one of these years anyway because of gay marriage and other wickedness (kidding, kidding).
Share |
Posted by Christopher Bigelow at 9/26/2008

As you know, I do live in Southern California, although not close enough to the beach to my liking (about 40 miles). But we've managed to give our daughter the kind of memories you're talking about by beach camping every summer at McGrath. For her, these week-long escapes have been "living-in-the-moment" moments and, come summer, it's never a question whether we go again or not. Actually I grew up on the East coast, and Oyster Bay, Long Island was my Abalone Cove.

BTW, I don't feel too sorry for you as I've been missing the Utah mountains (particularly Big Cottonwodod Canyon) something fierce since I relocated to Babylon.

Wow, beach camping. I never have done that, would love to someday... I bet the surf lulls you to sleep all night long.

That's the sweet thing about the CA State Parks Dept. They maintain these swell sites up and down the coast with fire pits, picnic tables and indoor coin showers (for wusses like me). Boogie board all day, then swap stories at the campfire late into the night. Kids wander off to the tents with flashlights to play cards...