A Penny for My Thoughts 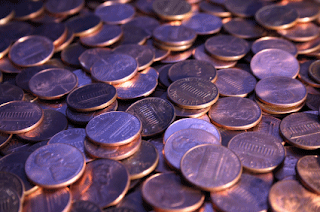 Man, do I ever hate pennies. Whenever I get any in my change, I throw them right in the penny dish by the cash register, and if they don’t have one of those, I throw the pennies right in the trash. I can’t stand those nasty, meaningless brown things in among my shiny silver change.

I think we should absolutely do away with the penny, but America is not good at that kind of change. When I served my mission in Australia, they had recently done away with their one-cent and two-cent pieces, and they didn’t miss them at all.

With as much debt as our government has, they should be trying to cut costs wherever they can, and they certainly don’t need to spend millions on making pennies. And they are total dummies when it comes to their dollar coins as well, because they keep making the paper bills too, so of course people aren’t going to change. Again in Australia, they discontinued the dollar bills when they introduced the coins, and it’s worked great. Stupid America!

I don’t know why I’m even bothering to rant about pennies. The only time I ever use cash anymore is to buy a drink at the gas station or some candy out of the vending machine, and that only happens every week or two. Everything else goes on the American Express so I can get my Costco rebates at the end of the year (last year we got almost $700).

Oh, and why the hell is our dime smaller than our nickel? Totally lame. Anything been bugging you lately? (I mean, besides the economy and the environment and the election...)
Share |
Posted by Christopher Bigelow at 9/08/2008

Pennies are still good for pitching in the hall during Sunday School, circuit breakers and railroad tracks.

Just this morning I was grateful for my pennies (which made it so I didn't have to break my $20) at Wal-Mart. They were quite handy. But they sure make my wallet bulky. I use cash (my Costo rebate is pretty skimpy, only a hundred bucks or so). Hmmm, that gets me thinking...Are dollar bills bulkier than dollar coins?? Dumb America.