Weeping, Wailing, and Gnashing of Teeth 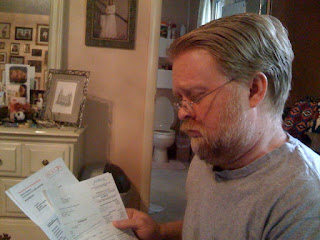 When I arrived home from work last night and retrieved the mail, methought I could hear soft wails and sobs of dismay emanating throughout our neighborhood, which is about half retired empty nesters and half families with children still at home. Sure enough, in my stack of mail I spied our quarterly statements for our retirement accounts, and pretty soon I was weeping along with everyone else.

A couple of years ago, Ann and I moved some 401(k)s from previous employers into independent IRAs, which are now worth less than our original investment amounts. Last quarter we lost about $8,000 on them, and this just-ended quarter we lost over $10,000. I wonder if the last quarter of 2008 will be even worse, considering how October has gone so far. Between the two of us, these IRAs are currently worth about $56,000.
At work, I have a 401(k) that my employer half-matches up to 6%, with a five-year vesting requirement. I've gradually upped my contributions to the full 6% so I can get the full 3% of matching (well, 3/5 of it anyway, since I'm only three years vested so far, coming up on my fourth anniversary in December). This account has lost 23.45% over the past 12 months and has lost 12% since I started it. Right now, it's worth only about $7,200.
Oh, and by the way, the media has been careful not to use the panic-inducing words "stock market crash," but by most definitions the stock market has indeed crashed over the last week, with total losses of 20%. I don't think we've had one single day quite as bad as the worst single day in October 1929, when the market declined by 10% in one day, but we still meet the overall definition of a crash for the week.
Obviously we're in a deep recession that may last for several years, and I wouldn't be surprised if it turns out to be the worst economic slump since the Great Depression (in fact, I think it already is, overall). I don't remember what the exact definition of a depression is, but I hope that if we enter one, it won't be as bad and protracted as the Great Depression because the government is much more proactive now than it was back in the 1930s, when it waited too long to help and made some blunders, such as introducing isolationist trade tariffs rather than cooperating with other nations.
Ann and I are sitting pretty good with income and debt, but not perfect. We've gotten behind this year because we've taken two expensive vacations, but it looks like we're finally catching up, if we can keep ourselves under better control than usual this Christmas. We have a $14,000 unsecured consumer loan at only 2.9% interest, which was for remodeling, timeshare, and some other sundries. We owe only about $80,000 on our mortgage at only 4.72% interest, and it was a 15-year mortgage so we have only about 8-9 years left on it, and I think the house is still worth about $275,000. We owe about $200 a month in loan and interest payments to my mother-in-law, which she has said she would excuse if we're ever unable to pay, and I pay $600 or $800 a month in child support (it's lower when Sophie is living with me, as she is now), with another 4.5 years left on Jordan and 6.5 years left on Sophie.
We don't have any credit card debt or car loans, knock on wood, and we maintain a six-figure home equity line of credit that we don't ever touch, keeping it for emergencies such as a long period of unemployment. That home equity line helps me feel more secure, although if things got really bad with plummeting home values and/or widespread unemployment, I know that banks can rescind such lines even if one's credit remains good. My credit score is in the mid-700s, now that my divorce-related bankruptcy in 1997 has finally dropped off my credit report. But I guess since this whole crisis is about faulty credit policies and the freezing up of the credit markets, maybe even a good credit score doesn't mean that much anymore.
All this reminds me of a scripture from the Book of Mormon that I think applies to our nation as a whole right now: "O that we had remembered the Lord our God in the day that he gave us our riches, and then they would not have become slippery that we should lose them; for behold, our riches are gone from us" (Hel. 13:33). But hey, let's go ahead and keep legalizing gay marriage state by state—that'll show God we're ready and willing to receive some more blessings.
Share |
Posted by Christopher Bigelow at 10/11/2008