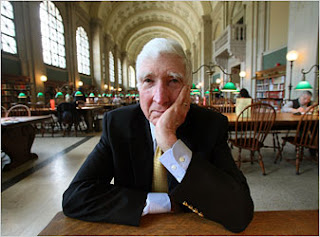 Well, my favorite author is suddenly dead, and it hits me personally more than usual when a famous person dies, because I felt such a connection to his work. But now maybe I can catch up with reading all his books before I die.
I just love the way Updike writes, the great descriptions and metaphors and observations mixed with lots of sex. (In fact, even a big fan like me occasionally asks, "Do you have anything to write about other than suburban adultery?")
A couple of years ago, I sent Updike a letter and copy of my own novel Kindred Spirits, but I never heard back. I consider him an influence on my own writing, though I'm nowhere near as talented in sheer writing ability. He enboldened me somewhat to include some sex in my Mormon novel, though nowhere near as graphic as he does it. I quite envy his literary career and once may have hoped that something similar could happen for me.
I'm glad I still have several Updike novels sitting on my bookshelf for me to discover, but I'm sad that I can't look forward to any more. I wonder if his publisher has anything else left to publish posthumously. Actually, I'm not really interested in Updike's poetry, criticism, or essays, just the fiction. Man, he was amazingly prolific, with over 50 books in his career. I wonder what God thinks of him.
Share |
Posted by Christopher Bigelow at 1/27/2009

I know he has a short story collection coming out next fall. And from what I remember him saying, he was currently working on a historical novel set in the 1st century a.d., but sadly it may be unfinished (but will probably eventually see the light of day).

But if you haven't read any of his criticism, I would highly recommend it. Superb, amazing writing.