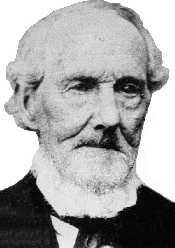 One of my great-great-great-grandpas was named Nahum Bigelow. He roamed the land as a peddler before marrying relatively late and later becoming a Mormon. When he lived outside of Nauvoo, some anti-Mormon neighbors poisoned his well and his coffee. The poison in the well didn't work because one of the sons noticed green scum, but the poisoned coffee did work. However, it took several years before the painful abdominal fits eventually killed him, and in the meantime he moved his family to the new Mormon homeland in Utah. Two of his daughters married Brigham Young, but I'm descended from a younger son, Daniel. Nahum died just minutes before Brigham reached his house to pay his last respects to his father-in-law.